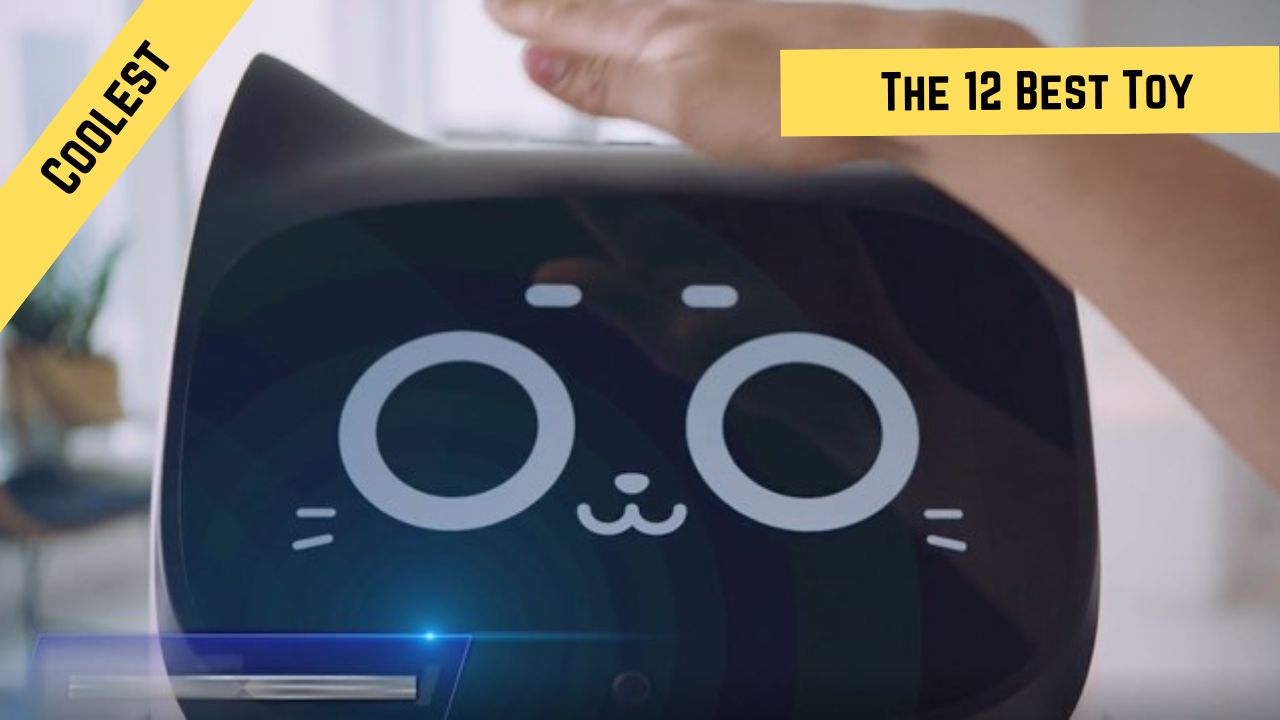 With technology moving at such a rapid pace, it’s only fair to exclude children from the fun. Here are 12 futuristic toys that even adults can enjoy. You can zoom around in a mini sports car or spy on the neighbor’s cute dog while at home.

Geeky kids will love some of these high-tech robots to play with and program, and some of them are downright cute. There’s something for everyone, so let’s take a look at the 12 coolest toys that are on another level.

Also Read: Who is Gwen Stefani?

Watching race cars drive can be pretty exhilarating, but what’s more exciting is having your own little race car. The Nine Bot go-kart pro takes go-karting to the next level. These powerful go-karts are designed as supercars and built with a high-end brushless motor made of copper coils to ensure the least amount of resistance.

The heat loss to ensure the maximum amount of cruising capacity. Its type of rear tyres make drifting easy, so you can look cool effortlessly, but don’t be intimidated by how high-tech it is. This futuristic go-kart is designed to accommodate beginners as well as professionals. The immersive engine sound simulator makes it feel like you’re driving a real race car on a real track. and with all its cutting-edge features, we might as well say you are driving a real race car, right?

Board games are a great way to bring people together to have some fun, but they’ve grown kind of old-fashioned. The Tilt 5 augmented reality game board system is here to bring your games to life. It’s a high-tech augmented reality system with an optical system that provides a private view to each pair of glasses, preventing cheating.

This enables a unique multiplayer gaming experience since each person gets a personalised view. so you can only see your own hidden piece and not your opponents’. The game board is outfitted with micro reflectors that provide a vivid display that only reflects back to the glasses, allowing you to see what’s on the board.This amazing toy is here to give you a futuristic gaming experience.

Paper aeroplanes are fun to make when you’re a kid, but their limited flight capacity can be pretty unexciting. but now you can take paper aeroplanes to the next level with this amazing gadget. These smartphone-controlled paper aeroplanes have an award-winning design that can help your childhood fantasies take flight. This conversion kit features Bluetooth smart technology so you can control your plane with your smartphone.

The controls are really simple and fun; you just have to tilt your phone from right to left and push the throttle button on the app to make it go high or low. The plane has an incredible 55-meter range and a crash-proof design, so you can say goodbye to those boring old paper aeroplanes and say hello to this amazing gadget.

If you’re an Avengers fan, then you’ll love this next toy. Meet the Iron Man robot. It has a retractable faceplate, and you can set any face to be in there. It doesn’t have to be all tony all of the time.This little dude is fitted with an accelerometer, gyroscope, and IR metre that let it walk without falling or hitting other objects around it.

The coolest feature of this robot is the AR app, which you can download on your smartphone. Use the phone to control the robot and help it fight the bad guys. It gets stronger with time as you earn more weapons and armour. You can even customize it by installing new scripts and actions. Now this is a robot every Marvel fan needs.

Take your ping-pong skills to the next level with the ping-pong trainer bot. You can train at any time with this cool device. It shoots out ping pong balls so you don’t have to have an opponent to practice, and it connects to a smartphone app so you can control and customise the speed and style of each shot. It can shoot any type of spin and works on any surface.

Feel free to place it anywhere on the table.It comes with preset modes that help you practise any kind of shot at any pace; it has adaptive shots that let you start out slowly and start pacing up as you get better, increasing the challenge; advanced players can even use the unpredictable random shots option. It’s small and portable, so you can take it, but don’t be fooled by its size; it gives the performance of much bigger machines.

How about we combine exercise and fun? It sounds hard to do, but the vertebra is exactly what makes that happen. This high-tech poco stick lets you jump several feet into the air and have the time of your life. It has adjustable air pressure so all weights can have an easy experience, so it’s not just for kids.

All the manufacturing is done in the company’s southern California shop, and each forté is crafted to perfection to ensure safety. The best experience is that you can carry it around anywhere easily and hop around on it. It makes the muscles in your body work, giving you a great cardio workout. Pretty neat, right?

Meet this super-compact drone that fits in the palm of your hand. Taking high-resolution images from way up in the sky was never easier. It’s really easy to use and produces stunning footage. You can control your drone with a smartphone, and the tilt mode lets you control its tilt by tilting your phone.

Have a little spider friend follow you around the house. Spider Pie is an intelligent visual hexapod robot that looks creepy and cool but is smarter than you think. It has a high-resolution camera with object tracking, so it’ll move around, detecting and bypassing obstacles. It has a mobile app that live streams the footage it’s collecting in real time.

It can also follow objects that it sets. It has an eye on it, so it’s ideal for keeping track of your pet while you’re away. If your furry friend isn’t creeped out by it, Spider Pie has a Raspberry Pi controller, which makes it extremely customizable, and you can programme it to do anything. It’s perfect for aspiring programmers to learn some practical coding and robot control.

Imagine a drone that transforms to run on land when it needs to. The HD H6 is a futuristic remote control toy that flies around like a drone. and when it needs to run, its propellers transform into wheels that turn it into a bike. It can work from a distance of 40 feet, and the one key return function lets it return to its previous function.

When it finishes, if it loses your signal, this smart device uses its log to return to the previous functions. The smartphone app lets you live stream its camera feed via wi-fi. The HDR-H6 has the ability to hover motionlessly. So it can give you ultra-smooth footage every time, and this high-tech drone costs just $60.

anker is a robot that can give you hours of entertainment with your friends. It’s highly customizable, not just in features but in aesthetics as well, with changeable colours and faceplates, so you can make it truly your own. Moreover, you can add dozens of add-ons and components to really get the most out of the robot and make it good for any situation. It’s also programmable, giving you even more ability to fine-tune it to your preferences and needs, but what sets the Ganker apart is that you don’t just enjoy it alone.

but through its rich smartphone app, which is used to control it as well, you can link up with your friends and play thrilling multiplayer matches with each other. What’s more is that unlike traditional robot fighting matches, here you don’t have to worry about breaking your robot because the robots don’t hit that hard; instead, they contain sensors to detect the intensity and quality of the hits and virtually reduce their health accordingly. Therefore, you don’t have to worry about wear and tear and can keep your investment intact for years.

Does your kid really want a pet but is not old enough to handle one well? Here’s a toy that can give all the fun of a pet without needing all the care and maintenance. This cute robot chameleon won the 2018 toy award for preschool-aged kids, and you’ll see why. It has large, revolving eyes to mimic a face with rich, dynamic motions.

It, like a chameleon, can change its colours on the back and crest.It can even stick out its long tongue like a real chameleon, pushing obstacles away. What’s even cooler is that this tongue is magnetized. So it’ll stick metallic objects to its tongue, mimicking a real chameleon. How cool is that? It works with a remote control and is a total bargain at just under $50.

Ever wondered what the restaurant or hotel of the future would look like? Well, you don’t have to wonder. Because it’s already here, Bellabot is a smart robotic waiter that will not just serve your food but also make your day on the functional side.

It has four robust, sensor-enabled trays that can hold up to 10 kilogrammes of weight, so it’ll carry anything you hand it. It has a wide viewing angle and object detection, so it will navigate a smooth environment without bothering anyone and reach its destination. It’s designed to be highly accurate at that, so you don’t have to worry about delayed orders or orders reaching the wrong destination.

But that’s not all; this robot also has a personality that will delight your customers. It has a screen in front with a surface on top that’s sensitive to gestures. and on that screen, it lifts its catalytic personality that meows when it reaches your customer to encourage them to pick up their food. Customers wanting to pet it like a cat can stroke its ears on the touch-sensitive surface, and it will reach out with pleasure, saying your hand is so warm, how adorable—but this quirky cat also has responsibilities.

So if you don’t let go, it’ll change its expression to an annoyed one and tell you that it has work to do, okay? Comment below on which of these toys you’re getting your hands on first.